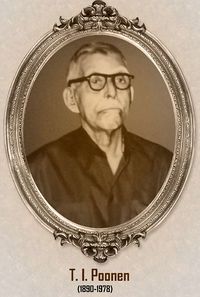 Therathanath Ittoop Poonen (1890-1978) was born on the 2nd of October, 1890, in Kottayam. He hails from the ‘Therathanath’ family, which had properties adjacent to the CSI cathedral of today. The name ‘Therathanath’ comes from the word, ‘Ther Sthanam’, or the place where the chariots of the Maharaja were parked.

Poonen was a very studious boy, which was noticed by one of his uncles who became his guardian on account of the demise of his parents at a very young age. After completing his schooling in Kottayam, he continued education in the Madras Christian College. He was awarded three Gold Medals for his academic excellence. He was an individual very much liked by the English people in the faculty of the Madras Christian College.

T I Poonen joined the Union Christian College in 1921, during the initial days of the college and headed the history department. He continued his research into the Portugese and the Dutch days in Kerala and published quite a few of his writings. He was awarded the ‘Doctorate’ after he relinquished his teaching career in the U C College.

The authenticity of his writings were on account of his ability to read the Dutch language and this enabled him to help a number of young individuals who did research in this field under his guidance and finally obtained doctorates for themselves.